Maybe the Spring Festival is much more important and interesting than Christmas, but I like Christmas Day better. Because we can spend time with our friends and classmates during Christmas. When it is snowy.

Christmas becomes much more lovely, just like in fairytales. I can imagine I am in a fairytale, the girl who sold the matches is my friend, the ugly duck becoming more and more beautiful and so on. What a beautiful place! So we can also call Christmas “Snowy Lovely Day.”

On Christmas Day, shops are red and green. There are so many Christmas cards, Christmas hats, Christmas dolls and many colourful things. So shops look very beautiful. We can give a card or a doll to our friends and say “Merry Christmas.” By the way, I think studying can also become much more interesting.

Christmas is coming, it also means a new year will come. Let's study harder to welcome.

Evely nation has its own folk festivals. Those festivals give people a chance to be away from their regular work and everyday worries to enjoy themselves and to develop kindship and fi'iendship. The spring festival is the chief holiday in china while christmas is the most important redletter day in the western world.

The spring festival and christmas have much in common. Both are prepared hefiorehand to create a joyous atmosphere; both offer a family reunion with a square feast: and both satisfy the children with new clothes, lovely presents and delicious food. However, the chinese spring festival has no religious background while christmas has something to do with god and there is santa claus with white heard to bring children presents. The westerners send each other christmas cards for greetings while the chinese people pay a call on each other.

Nowadays, some of the chinese youth has begun to celebrate christmas, following the example of the westerners. Perhaps they do so just for fun and out of curiosity.

Christmas is one of the most important celebrations of the year for the western countries. It falls on the twenty- fifth of December and has the same importance as Chinese New Year to people with English backgrounds. The celebration is for the birth of Jesus Christ, who is the son of God in Christianity. Now days Christmas is no longer only celebrated by the Christians, but by most people from all over the world.

On the twenty- fourth of December everyone gets excited for it's the day before Christmas which is called Christmas Eve. The children are usually sent to bed early and are warned that ”Santa Claus will only come and give you a present if you be good.“ The younger kids actually believe that Santa will come down the chimney on the sleigh that's pulled by his reindeers. Food like short bread and beer are prepared for Santa when he comes, however most times parents just eat them. Some children put socks and sacks up for the holding of the presents (that their parents put in).

Rise and shine on Christmas morning! The children are always the first ones to wake up, some even do at four. Present wrappers everywhere! They look into their presents with a big smile on their face and oh dear…I hope no one's disappointed. I feel sorry for anyone that got pink underwear. Children play while dinner is prepared by the adults. The Christmas dinner are usually eaten together by relatives. The tradition of Christmas pudding and roosters are usually eaten with deserts afterwards. The rest of the day is usually games and fun before the good days all come to an end.

I wish everyone a Merry Christmas and a Happy New Year!

Christmas Day falls on the twenty-fifth of December. It is a very happy day for many boys and girls. Before the term ends in some schools, the children act a nativity or “birth” play, showing how Jesus was born in a stable.

On the twenty-fourth of December, all children are very excited. Usually they are sent to bed early so that their parents can get the presents ready. The younger children think that Father Christmas will come down the chimney or fireplace, so they hang up a sock for him to put presents in. The greedy ones even hang up a pillow-case or a sack to try to get more presents. Later that night, father or mother will put presents in the sock, and leave others at the side of the bed.

On Christmas morning, the children wake up very early. Some even turn on the light at two oclock, and most of them are awake by six oclock, and the young ones play while the dinner is prepared. At about one oclock in the afternoon, the Christmas dinner is brought in. The turkey or chicken is quickly eaten. Children search in their Christmas pudding for new coins which are hidden in it. The rest of the day is full of games and eating until the happiest of all Christmas holidays comes to an end.

Christmas is also known as Christmas, translated as "Christ mass", western traditional festival, every year in December 25th. Mass is a kind of church service. Christmas is a religious festival, because regard it as to celebrate the birth of Jesus, named "christmas".

Most of the Catholic Church will be first in the 24, Christmas Eve, i.e., the early morning of December 25 at midnight mass, and some Christian will be held caroling and on December 25 to celebrate Christmas; Christian another branch of Orthodox Christmas celebration in the annual January 7. 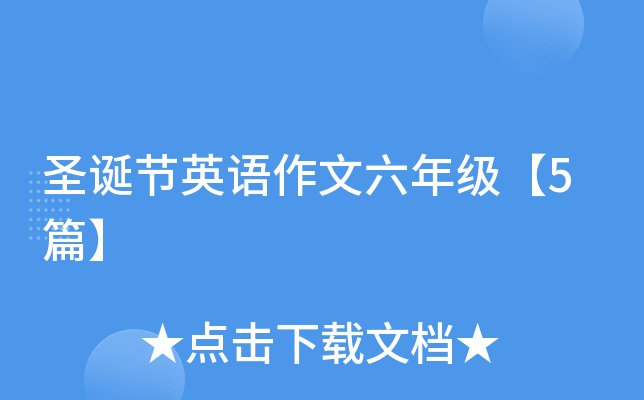